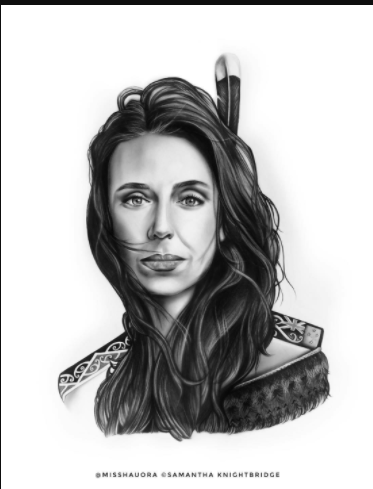 National Party supporters are constantly having to revise what they think of Prime Minister Ardern.

Fran O’Sullivan, wrapped in tights and leopard skin stepped up to the microphone soon after the 2017 election and told us Jacinda had no substance.

Ironically many conservative New Zealanders were more worried about Jacinda’s hair style during the televised debates than what she had to say – and when Winston chose Jacinda rather than Honest Bill – many drank so much Gin they lost their minds.

“Business confidence is down” – chanted the media as CEO’s went all into a terrible emotional FUNK – because they were politically biased scared little poodles about a global economic slowdown.

“She’s a pretty communist” cried Leighton Smith and others – visibility upset that Jacinda had once led the Socialist Youth.

“She’s a horse, look at her teeth” – cried deep and meaningful males – most with an overhanging gut and no girlfriend.

But sheet ( Australian for shit! ) – Jacinda delivered a $5.5 Billion dollar surplus in 2018 and the haters had to check themselves.

Did she still have no substance? Has the star dust settled yet? What about ….what about…what about….

Media started to make up stories about how Jacinda had not actually visited China yet and met the top dude – like Sir John had.

She has messed it up with her lack of substance and her foreign home buyer ban they all agreed.

Dark rumours circulated and Fran O’Sullivan was not impressed about substance issues, neither was Audrey and Barry nearly went spare with concern about a possible relationship breakdown between China and New Zealand – even when China officially said – fuck no worries bro.

Of course when Air New Zealand failed to fill in their flight information and were turned back from China – NZME media blamed Jacinda 100%, the writing was on the wall – and business confidence was down.

Remarkably that was at the time when NZ Exports to China shot through the roof to record levels – and yes – Jacinda delivered a $7.5 Billion surplus in 2019 and met the top dude in China – but only for a day.

The Christchurch massacre had happened.

51 New Zealanders gunned down by a nutcase.

Jacinda shot to world fame for her leadership.

“Stardust not settled yet?”

“No. But she still lacks substance”.

The red carpet was rolled out in New York, the Christchurch Call brought 9 internet giants to take action against promoting violent extremism online and still her critics rated her 6 out of 10.

Jacinda intervened at Ihumatoa – to stop the cops from repeating Bastion Point and give a fairer solution a chance.

“Where is the substance” – howled her critics.

There was a Wellbeing Budget which looked after the vulnerable – not just our GDP – and Jacinda had been a dazzling international star in early 2019 at Davos.

She managed to upgrade the China FTA, kick off a European FTA and protect our exporters from Brexit as well.

How did the local media and Business community greet all of this?

“She has celebrity and empathy …but no substance” – sneered her sour grapes critics bitterly.

National supporters all agreed – she must not ever travel.

Business confidence was totally rock bottom – even though New Zealand’s GDP GROWTH RATE was higher than the EUROZONE average, higher than the OECD average and higher than Japans’, Australia’s, Canada’s the UK etc – and a total of around $13 Billion in economic surpluses had been achieved under Jacinda’s watch.

Naturally CEO’s were inconsolable with grief and shattered confidence.

How could they go on?

National were not in power and the MOOD of the boardroom rated Jacinda below 3 out of 5 for all of the reality surrounding them.

Duncan Garner said Jacinda may have to resign over her truthful comments about the Labour Party sex scandal and Simon Bridges walked on water like the new messiah ….after a TVNZ Colmar Brunton poll – said New Zealanders love National more than Labour.

Then a volcano blew up and people were killed – and Jacinda was almost first on site with the people.

She worked through this horrific issue day after day with us all.

“Okay so she has empathy, celebrity and is hard working – but she still lacks substance” – said National supporters revising their criticisms once again

New Zealand’s debt to GDP ratio fell to around 19.7% which was below the four year target – in ONLY two years under Jacinda’s stewardship.

Mike Hosking was outraged of course – and constantly threw hissy fits and scratched his face over all of this.

He searched day and night for negatives but they were increasingly petty – apart from KiwiBuild – which was all National was really holding onto now.

But shit – Jacinda built over 4000 new state houses when National were selling them off.

OMG what would National do now?

Just days after the first case of international infection Jacinda banned entry to New Zealand on 2nd February to anyone coming from/via China.

The numbers of incoming visitors plunged massively down to a trickle.

Since then New Zealand is top of the class when it comes to the stringency of restrictions we have together implemented under Jacinda’s leadership.

No quibbling – the measures worked very well – and it was impractical to implement mandatory quarantine for all returning kiwis until the numbers dropped.

We went into Lockdown – and Jacinda lead us through it with almost daily updates and brilliant communications.

Now look at the results?

“Okay so she has empathy, she has celebrity, she is hard working and she bailed us all out with massive economic assistance, she’s good in a crisis – but she still has no substance.” – the Nats still say.

Oh fuck off you pack of shit-stained sore losers.

Grow up and recognise a world class leader when you have one.

Jacinda’s critics need to get real